Cajuns are an ethnic group who are descendants of Acadian exiles.  They were French-Speakers from Acadia which was mainly Nova Scotia, Eastern Part of Quebec, Northern Maine, and some of the Maritime Provinces. The Cajuns settled in four regions in South Louisiana: Coastal Marshes (New Orleans Area and Houma), Swamplands of the Atchafalya Basin, Prairies in the Attakapas Indian Land and the Levees and Bayous of Lafourche and Teche. The Cajuns came to Louisiana in the late 1700’s. 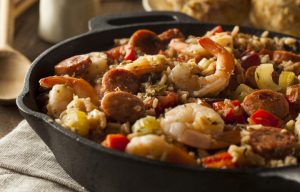 Early Cajuns did not have modern cooking luxuries like refrigerators. As a result, they learned to incorporate every part of the animal into their dishes. Whether they are making Boudin (Cajun Sausage) or Andouille Sausage, the unique Cajun seasoning flare will tantalize your senses. But, the one thing you can count on is The Holy Trinity. The Holy Trinity consists of onion, celery and bell pepper. The Holy Trinity seasoning combination is the starter for almost every Cajun dish. Then, garlic, paprika, thyme, parsley, and green onions are combined to create that unique Cajun flavor. 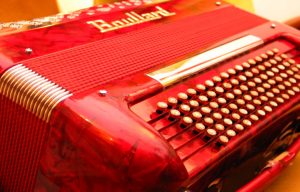 Cajun Music is a genre that came  from the Francophone folk music and traditions from the French-Speakers from Acadia. The music is usually accordion- and fiddle based. Western swing, rock ‘n’ roll, and country music have influenced Cajun music.

A Cajun Two-Step almost sounds like the name of a specialty cocktail but it is the name of a special Cajun dance. It is primarily categorized as one of the three dance steps to Cajun music. The two other dance steps are: the Cajun Jitterbug and  the Cajun Waltz. There are numerous variations of the three dances. However, the basic steps of the Cajun Two-Step are: step, step in one direction, and step, tap in the other direction. When you step, step, you shift your weight from one foot to the other. However, when you step, tap, you’re not shifting your weight on the tap but merely touching the ball of your foot on the dance floor. In a way, the Cajun Two-Step is very similar to the country western two-step, however the Cajun Two-Step tends to have not as many fancy turns and spins compared to the Western Two-Step.

When the Cajuns moved to Louisiana, their language evolved to a unique French dialect that is called Cajun French. In some cases, Cajun French has maintained words, structures and pronunciations which the French have long ago abandoned.  For example, Cajuns have maintained the original chevrette to refer to shrimp, while the French adopted the Norman regional variant crevette as their standard word. Cajuns also borrowed from other languages including Spanish, Choctaw and African languages.  The word chaoui for raccoon comes from Choctaw. Raccoons did not exist in Europe. The word gumbo is derived from an African word for okra.