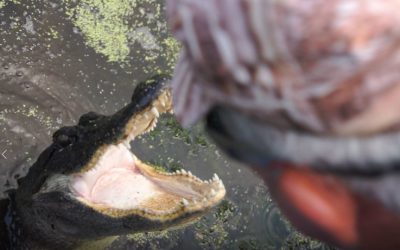 Reptiles are cold blooded animals which means that their body temperatures are regulated by the temperature in their environment. Alligator body rates slow down during the winter months, but in the summer, they can be seen basking in the sun and swimming throughout the Louisiana swamps.

Young alligators will eat small animals like frogs, small fish, insects and even crawfish. As they get bigger, the food they eat also gets bigger and includes nutria, beaver, birds, snakes, deer, and turtles (just to name a few). Alligators will hunt anytime, but at night they are more active.

Did you know that alligators make nests?

If you are interested in experiencing a Louisiana Swamp Tour and learning more about American alligators, check out all of our swamp tours HERE.

Our tours are Entertaining, Educational and Exciting. They provide you with a relaxing view of our beautiful swamps.

During summer and fall, you will encounter plenty of alligators on our tours. Even though gators do hibernate during the cold winter months, they still lay on the bayou banks on warmer days. So even in the winter our native Captains can sometimes find a sunning gator on your tour. The slow drift of our tour boats through moss draped trees and small waterways, will provide ample opportunity for viewing and photography.