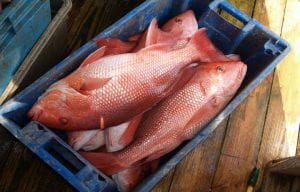 The Gulf red snapper population, which had been depleted at one point, has been recovering quickly, according to the Louisiana Department of Wildlife and Fisheries. However, as the population grew, recreational fishing seasons in federal waters got shorter. The department says this is due to a number of reasons including increased catch rates, increased recreational fishing effort, extended state fishing seasons, larger fish, and insufficient monitoring of recreational landings.

When You Can Catch Red Snappers

The Louisiana Wildlife and Fisheries Commission announced this year that the private recreational red snapper season will begin on Friday, May 24 in both state and federal waters. The season will run weekends only (Friday, Saturday, and Sunday, including the Monday of Memorial Day and Thursday of Fourth of July) with a daily bag limit of two fish per person and a 16-inch total length minimum size limit. In addition, to fish for or possess red snapper (and other reef fish) in federal waters, a fisherman must use non-stainless steel circle hooks when fishing with natural baits for reef fish and use a dehooking device to remove a hook embedded in a reef fish to release the fish with minimum damage.

Remember you ( Louisiana residents and nonresidents 16 years or older) need a fishing basic license before heading out.  The license allows you to use the following gear or to possess fish which have been caught for recreational purposes in Louisiana waters:

Licenses are available at special rates for seniors, military, students, and people with disabilities. Lifetime Licenses are also available.