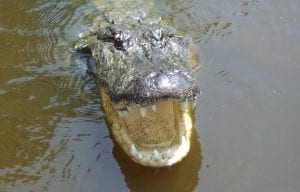 The gender of an alligator is determined in the climate it is hatched, according to experts. As a matter of fact, the temperature is a deciding factor in an alligator’s gender.

How Does Temperature Affect The Eggs?

Studies found that in the American alligator’s eggs, incubation at 34 ºC (93.2 ºF) and above produces mostly males, while incubation at or lower 30 ºC (86ºF) produces mostly females. This means if the nest is laid on a riverbank oi the sunlight, the offspring will mostly be males. If it is in a cool and shady place, the eggs will yield females.

The warming of the habitats of species that have temperature-dependent sex determination (TSD), are beginning to affect their behavior, according to experts. They say many species have begun to nest earlier and earlier in the year to preserve the sex ratio.

Alligators typically begin courting in April, with breeding taking place in early May. A female alligator lays between 35 to 90 eggs, according to scientists. She covers them with sand or vegetation to keep them warm after she laid them. The the incubation is about 65 days.

Are You Planning to go on a swamp tour soon?